The world record team from Snow Day went back to the table again for a summer camp-themed attempt at the world’s largest water balloon fight titled “Party Camp.” Being an integral part of this production team has been one of the most exhilarating and inspiring experiences, and I am so glad Neil Bergquist called me back again for this massive event.

Production began only 90 days prior to the event, but the overall goal became: 300,000 water balloons, 12,000 friends, 7 days of camp in 7 hours… While Ryan Bourke and Kelci Zile managed operations and media, Neil went for sponsorship and I dove head first into a project that was described as “Theme Park Design.”

We were taking over the Seattle Center again, but this time on the grounds of the fountain lawn, fisher green and atop the pavilion itself for our main stage. TEP brought in expert sound company Carlson Audio for the main stage sound system equipped to handle two bands and four DJs on a stage erected on the rooftop of the event beer garden. One of the difficulties was making sure the performances didn’t become disconnected from the people hundreds of feet away. Local company Balloons & Cupcakes was brought in to set up a 100′ balloon arch over the main stage that would wave back and forth in the wind and making sure not to lose attention even from the far side of the venue. 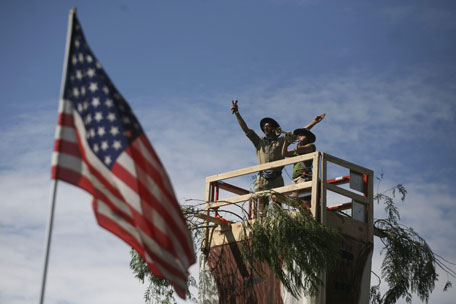 By far one of the funnest projects I have ever had the chance to work on, I contracted long time friend Styles Bentley to create a camp counselor character and host the event with the help from Missy King as his bugler sidekick. Adorned in short khakis and flat-brimmed ranger hats, they were the perfect catalysts for engendering each and every participant with a profound sense of fun and community.

The fun didn’t stop with sound, balloons, and artist management… We dreamed up and constructed a 40′ tall treehouse as the centerpiece of the event for our hosts to announce from. Using custom wooden paneling, the basket of a scissor lift was converted into a treehouse deck atop an evergreen canopy that rose with the occupants skyward revealing a four-sided skirt with the trunk of the tree painted on it. Members from Copious Love Productions came out to represent their world record team and offer a hand in this project. Six people went foot-by-foot painting the tree bark and steps as we raised the machinery upward.

The event itself was madness! Controlled and executed chaos. I had my trusty man Val Foster (of Crocodile) running the stage as I ran back and forth with a radio in my ear ushering the hosts and and keeping the production timeline. The entire day was a highlight reel for me, there are too many great things to recount. Though we didn’t end up with the world record attendance we would have hoped for, the effort did raise $55,000 so that kids from Seattle Children’s Hospital can go to Camp Corey next summer. Not to mention, every single person in attendance had themselves the time of their lives.

And as a finale, this is the video we produced for the event with friends Styles Bentley and Allen Stone: